Home > Information > The Paleo Diet – Can You Really Burn Fat Eating Like A Caveman?

The Paleo Diet – Can You Really Burn Fat Eating Like A Caveman?

What Is The Paleo Diet?

The concept of the Paleo diet started in the 1970s, and its popularity rose dramatically after a Paleo diet book was released in 2002 by Loren Cordain – a nutrition and exercise physiologist.

The Paleo Diet revolves around replicating the eating behaviors that took place during the Palaeolithic or “Old Stone Age” era, approximately 2.5 million years ago.

As this period of time led to the greatest advancements in neural expansion, brain size, and gastrointestinal capabilities, many people believe the diet must have been the influencing factor.

Advocates of Paleolithic methodologies also believe this way of eating, based on the principles of the ‘hunter-gatherer’, is the superior eating program to avoid disease, increase longevity and improve body composition.

The Paleo diet essentially attempts to copy what our cavemen ancestors would have eaten, meaning it primarily involves eating unprocessed meat and vegetables, though it also includes fruit, nuts, seed etc. in small amounts.

Foods to avoid/keep to a minimum are grains, legumes, potatoes, dairy, or any type of processed food.

No specific limitations are placed on meal frequency or calorie intake, as the focus is solely placed on eating the right foods.

At most, brief instructions may be given for minor reductions in the intake of fruit, nuts or oils if the primary goal is weight loss.

Based on the list of foods you can eat, Paleo followers tend to consume very-high protein, high fat - including trans fat, saturated fat, and dietary cholesterol – and low amounts of carbohydrate.

Although it is called the Paleo ‘diet’, it advertises itself as a lifetime endeavor as opposed to the typical “10 pounds in 5 weeks” philosophy.

What Foods Are Allowed? 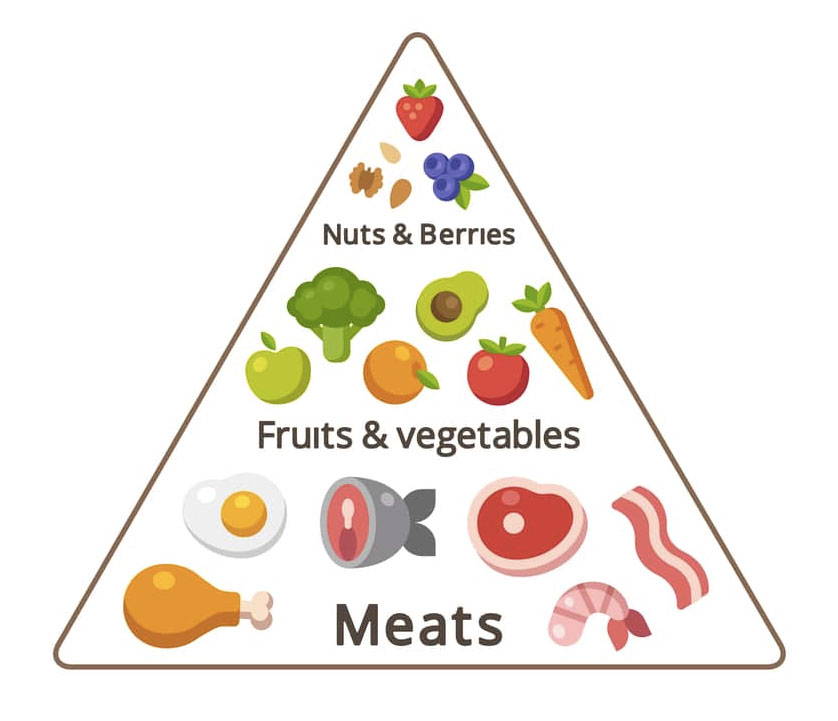 Below we've listed the foods that you should be regularly eating:

Foods That Should Be Avoided/Eaten Rarely

For further information and recipe lists, we recommend you check out the official paleo diet website.

The Positives of The Paleo Diet

The benefits of the diet are what make it so popular, but there's a lot of misinformation out there on what it is and is not capable of. Below we've listed the health benefits that are proven by science:

It May Help Prevent Cardiovascular Disease

A paleolithic hunter-gather type has shown in metabolically controlled studies to reduce the chances of cardiovascular disease in as little as 10 days, measured by a significant reduction in blood pressure and improved arterial distensibility – mechanical stress affecting the arterial wall [7].

Meta-analyses that conclude it is effective for the prevention of cardiovascular disease prevention state that the benefits are as a result of reduced metabolic abnormalities that typically stem from the overconsumption of processed carbohydrates in the Western diet – causing insulin resistance [8].

As insulin resistance causes the dysregulation of fatty acid metabolism, and a reduced functioning of the arterial wall that can lead to arterial blockages, the diets ability to improve insulin sensitivity is an effective method to prevent cardiovascular disease.

Paleo diets may also favorably shift the omega-6:omega-3 ratio (pro-inflammatory:anti-inflammatory ratio) and therefore reduce the oxidation of LDL-cholesterol that is so closely tied to plaque formation in the arteries and heart disease [9].

However, the best explanation for the benefits of the diet on cardiovascular disease is the weight loss that is commonly seen on the diet, with meta-analyses and large trials supporting the fact that reduced caloric intake is the most important factor for changes in health compared to any other dietary factors.

It Can Improve Glucose Control

Interestingly, the changes in glycemic control are better than what can be explained from the effects of weight loss alone.

Therefore, the improvements in glucose control may be as a result of decreasing the frequency and magnitude of insulin secretions (from carbohydrate intake), as well as increasing the sensitivity of tissues to utilize insulin when it is released.

This seems logical as the improvements in glycemic control from it are nearly identical to those seen in reviews of diets with either improved carbohydrate quality or lower carbohydrate intakes [11].

It May Reduces Inflammation

There is an inverse association between the Paleo diet and biomarkers of inflammation and oxidative stress, with similar improvements found when compared to the Mediterranean diet - a highly regarded diet for avoiding chronic diseases [12].

Decreasing inflammation is arguably the most important marker for overall health as it represents how well the immune system is functioning, and it plays such an integral role in the prevention of all types of chronic disease.

The potential mechanisms said to characterize this improvement are via the increased intake of fruits, vegetables, fish, and nuts, compared to normal eating habits, which are all associated with lower inflammation and less oxidative stress.

While it has a long list of positives, there are some negatives too. Below we've listed the most common concerns:

Although it does a great job at removing processed foods that contribute to a lot of modern diseases, it also restricts or eliminates the consumption of many healthy food groups without good reason.

This is mainly in regard to the limitation of whole-grain consumption, that has shown to cause deficiencies in folate, magnesium, fiber, vitamin E, potassium, flavonoids, selenium, lignans and phytosterols.

The removal of beans from the Paleo diet is also illogical as beans and lentils are known to be at the cornerstone of most centenarian diets, and provide a source of fiber, protein, B vitamins, iron, copper, magnesium, manganese, zinc, and phosphorous.

Paleo advocates have made claims surrounding the toxicity issues with legumes (beans and pulses), mainly centered around the lectin content in beans, however these claims are false as lectins are denatured during cooking processes. In fact, cooked legumes are not only completely safe, but their residual lectin levels fight cancer and various types of infection.

Another issue is calcium deficiency, with the Paleo diet only contributing to ~50% of the recommended dietary intake [7]. Uncorrected, this could increase a patient’s risk of osteoporosis – fragile bones that can lead to bone fracture.

Although meat can be part of a balanced diet when moderate quantities are consumed, excess intakes could raise concerns for health.

Excess dietary cholesterol can also facilitate fatty deposit build-up on arterial walls by the uptake of modified LDL-cholesterol particles, inducing the development of large plaques which are vulnerable to rupture and create arterial blockages [14].

Heterocyclic amines – formed when cooking meat – have a mutagenic and carcinogenic nature that have shown to increase DNA damage whilst simultaneously reducing the expression of DNA damage response proteins that are needed to protect cells [15].

Heme iron also has considerable influence on the oxidative damage suffered by biomolecules such as DNA [16].

As the standard form of the paleo diet doesn't restrict your daily caloric intake at all, there's still a very real chance that you'll end up overeating - just because the foods this diet includes are considered healthy, doesn't mean you can't over-indulge!

If you're using this eating program for the purposes of weight loss you will still need to keep a log or mental note of the calories you've eaten each day. The recommended guidelines for steady weight loss week on week would be a caloric deficit of 500-800 below your daily required caloric maintenance number.

Is It Effective For Weight Loss?

In its typical form, following a paleo diet is unlikely to produce drastic weight loss results, in fact for certain people, the diet may actually have no significant impact on their weight at all - this is because following a paleo diet doesn't involve calorie counting, it simply involves sticking to the list of approved foods.

However, as the diet is based on the restriction of food groups and processed foods, especially those high in sugar, weight loss will be seen in most cases due to the subsequent reduction in caloric intake.

Studies show weight loss on the Paleo diet of:

Overall we believe that, while it's not the most effective diet for weight loss out there, following the paleo eating patterns over the long term could possibly help you drop a little bit of weight.

This Diet Is NOT A Ketogenic Diet

It seems common for those on a Paleo diet to claim they are in a state of ketosis; producing ketones as an alternative fuel to glucose because of the restricted carbohydrate intake.

However, ketosis is only seen on ketogenic diets that not only severely restrict carbohydrates, but also limit protein intake – leading to a diet with over 75% of overall energy intake from dietary fat.

Unlike the ketogenic diet, the Paleo diet is very high in protein as most meals are based around some type of meat or fish. As a significant amount of excess protein will be converted into glucose for energy needs, this negates any physiological necessity for ketones to be produced.

More to this, there are many cases where the carbohydrate intake alone on a Paleo diet can be significant enough in itself to inhibit ketosis – depending on the amount of fruit and vegetables included in the diet.

It is not uncommon for Paleo diet reports to state an average carbohydrate intake that is significantly above the approximate 50 gram limit per day that is needed to induce ketogenesis.

The Misconception of the Paleolithic Era

It is clear to distinguish that arguments for a Paleolithic diet were not initially derived from modern science, but from the universal relevance of adaptation.

A large misconception is that our ancestors were mainly carnivores when, in fact, they mostly ate a plant-based diet. This is based on evidence from archaeological remains and analysis of modern nomadic tribes with similar lifestyles [1].

Although the composition of meat is often assumed to be responsible for our brain acceleration during the last 2.5 million years, evidence suggests the main factor was actually our ability to heat and cook food [2].

However, as meat is a dense source of calories it likely was an important contributor to further increasing energy intake, and thus aiding further growth and development.

The extent of this contribution is up for debate though as logical estimations predict that only ~3% of the Palaeolithic diet consisted of animal products [3].

Starch-based foods seemed to be the staple of our prehistoric ancestor’s diets, especially tuber foods such as potatoes and yams.

This is backed by DNA evidence, conveying that our genes encoded the enzymes needed to digest starch in the midst of the Palaeolithic era [1].

For these reasons a true Paleo diet would be based on starchy foods, instead of avoiding their consumption.

Of course, prehistorical diets vary based on the geographical location and food availability, but they usually contained a broad range of foods and were not as limited as many assume.

The Paleo diet is a proposed lifestyle where individuals incorporate eating behaviors that try to replicate those seen in Paleolithic era.

However, the foundation of the Paleo diet, and all that it does and does not include, is not based on scientific evidence from archaeological remains and analysis of modern nomadic tribes.

The diet does a great job at removing processed foods from the diet, and this has a beneficial effect on reducing inflammation, improving glycemic control, and decreasing cardiovascular disease risk.

However, the diet restricts foods such as wholegrains and legumes that should otherwise be incorporated into healthy balanced diets to contribute to micronutrient and phytonutrient intakes that have their own unique health-promoting properties.

In addition, the nature of the diet will likely lead to excess consumptions of meat, and thus saturated fat, dietary cholesterol, heterocyclic amine, and heme iron intake. These substances are associated with inflammatory processes, DNA damage, and arterial plaque formation.