What Is The Mediterranean Diet?

A Mediterranean diet is named after the traditional eating practices within countries bordering the Mediterranean Sea - including France, Greece, Italy, and Spain.

The diet varies considerably depending on the country or region, and therefore it is hard to pinpoint a ‘true’ definition of what the Mediterranean diet does and does not incorporate.

In general, based on the majority of variations, the diet is high in vegetables, fruits, grains, fish, legumes, nuts, beans, and cereals. There is also a focus on the inclusion of unsaturated fats, such as olive oil, in many meals.

It is clear the diet has a focus on the inclusion of abundant and diverse sources of minimally processed foods that have been consistently praised for their health-promoting effects.

Unlike most other diets, it does not completely eliminate specific food items or focus on severely restricting calories.

Compared to traditional western lifestyles, it is low in meat and dairy foods, which leads to a more balanced and healthy approach to incorporating animal products into it.

The Mediterranean diet is also the most consistent, compared with other popular diets, to the dietary guidelines advertised by worldwide health associations that aim to prevent cardiovascular disease and mortality [1].

Not only this, but it is arguably the most well-studied diet for the prevention of most chronic diseases. For this reason, it is not surprising that it has become the standard for healthy eating and a dietary template of particular value.

Finally, a Diet that Encourages Fruit, Vegetable, and Fiber Intake!

All diets aimed at improving cardiovascular health should encourage the daily intake of multiple fruit and vegetable servings; ideally 5-10 per day - something that this diet does! This is why it is often referred to as a heart-friendly diet.

Diets high in fiber, such as wholegrains, oats, and barley, further reduce cardiovascular disease morbidity and mortality through lipid-lowering effects, and it is recommended to consume at least 30 grams of dietary fiber per day from whole foods.

Unfortunately, this cannot be said for most diets that focus on severely restricting carbohydrate intake, even from whole-food unprocessed sources.

What Foods Are Allowed On The Mediterranean Diet? 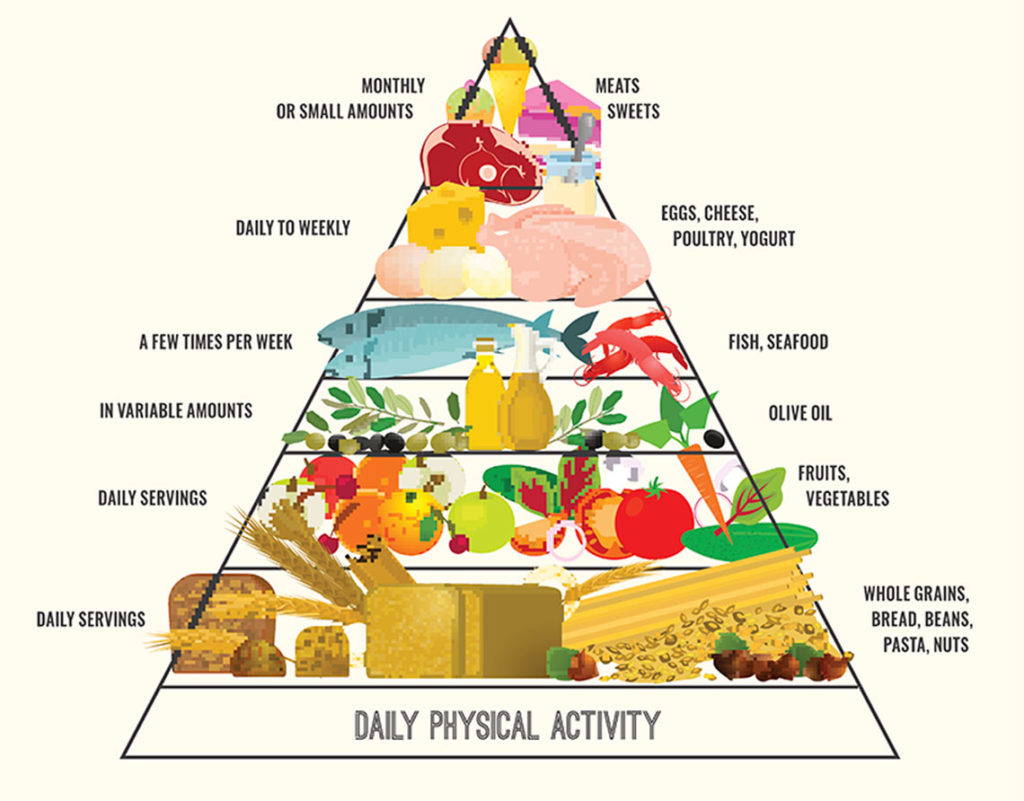 As we mentioned, there is no exact mediterranean diet, so the approved foods can differ significantly. Despite this, we've listed the foods that are generally allowed across the board:

Foods To Minimize While Following The Mediterranean Diet

These foods are allowed, but don't eat too much of them:

Foods To Avoid While Following The Mediterranean Diet

You should actively be checking the foods you eat for any of the following:

Is This A Good Diet For Losing Weight?

If followed exactly, it isn't really too effective for the exclusive purpose of losing weight - this is because the mediterranean diet is all about changing up the types of food you eat; it does not restrict your daily caloric intake (though it also doesn't encourage over-eating, but that's besides the point).

As the majority of mediterranean diet plans involve followers eating enough calories to maintain their weight, to use this type of eating plan for burning fat you'll need to modify it - be aware that, if you're modifying it to become a weight loss diet, you may not see the all the health benefits that this diet is famous for.

The most popular way to lose weight using this program is by imposing a simple caloric deficit. A good starting point would be to lower your intake by 500 - this is a number that's low enough to help you steadily lose weight, but not low enough to cause any nutrient deficiencies (a common issue with "VLCD programs").

The speed of weight loss can vary from person to person; if results are slow the caloric deficit can be pushed to 1000 or you can increase your daily exercise amount.

The Potential Benefits of The Mediterranean Diet

The primary reason people follow this eating program is for the health benefits - after all, they're what have made it so famous. With so many outlandish statements being made about what it is capable of, we've compiled the following list of science-backed health benefits:

The Mediterranean diet has consistently shown in all types of scientific studies, and large meta-analyses, to reduce cardiovascular disease rates and the risk of death that stems from these diseases.

Specifically, there is a ~75% reduction in deaths from heart disease, the world’s leading killer, for those who choose to follow this style of eating [2].

In fact, it is the only diet that is arguably comparable in effectiveness to prescription medications such as aspirin, statins, or antihypertensive drugs such as ace-inhibitors or beta-blockers.

It is for this reason that the Mediterranean diet is at the forefront of preventative cardiovascular medicine and may have unique benefits outside of caloric restriction that is typically achieved by going on low-fat or low-carbohydrate diets.

Endothelial cell functioning is critical to cardiovascular disease as they are cells that line blood vessel walls and are crucial for the maintenance of blood flow between vascular tissues.

A dysfunction of the endothelial cell would typically increase the permeability of the vessel wall to oxidized LDL-cholesterol, resulting in structural damage of the arterial wall and arterial plaque formation.

It Can Reduce Inflammation

High fruit, vegetable, and wholegrain consumption have repeatedly demonstrated to be critical for boosting plasma antioxidant concentrations and reducing inflammation.

Wholegrains even have their own unique phytoprotective components - ferulic acid, lignans, and phytic acid. They even contain a compound called spermidine, known to increase DNA repair and remove damaged components from within cells [6].

However, the high omega-3 fatty acid content of the Mediterranean diet is most the most popular explanation for its anti-inflammatory effects. Omega-3’s are inversely correlated with circulating inflammatory markers, mainly due to their favorable alterations to the integrity of cell walls, as well as their effect on inhibiting activation of pro-inflammatory molecules and reducing the expression of inflammatory genes [7].

On top of this, the high olive oil content appears to reduce the expression of pro-inflammatory molecules [8].

This is probably why trials that supplement the Mediterranean diet with considerable amounts of additional extra-virgin olive oil report a significant reduction in inflammatory markers [9].

The anti-inflammatory effects of olive oil are thought to be attributed to the presence of its phenolic compounds, and also oleuropein which is a potent antioxidant that scavenges free radicals [10]. Oleuropein can also exert cardioprotective, anti-atherogenic, and antiproliferative effects in the gut.

This being said, some people have criticized olive oil for having such a high omega-6 (pro-inflammatory) to omega-3 (anti-inflammatory) ratio, ~10:1, but keep in mind that the total polyunsaturated fat content within olive oil is still relatively low, so this shouldn't be a cause for concern.

On the other hand, it has just as many health-promoting effects for what it does not include, compared to what it does include.

The choline and l-carnitine content on a Mediterranean diet are ~50% lower compared to a typical Western diet. These substances lead to gut microbial production of trimethylamine N-oxide (TMAO), which activates inflammatory pathways and induces vascular inflammation, as well as promoting foam cell formation – cells that promote atherosclerotic formation.

It has been also demonstrated that gut microbial production of TMAO from dietary choline and l-carnitine increases the total body inflammation, independent of other lifestyle factors [11].

It Can Reduce Cholesterol

Of particular note, it significantly reduces circulating oxidized LDL – which is one of the main factors for causing cardiovascular disease [13].

Plasma levels of oxidized LDL can accurately predict heart disease risks and is a well-known marker for the development of plaque within the arteries.

Specifically, oxidized LDL-cholesterol inhabits and causes inflammation in the inner linings of the arteries which can lead to atherosclerosis and heart disease.

The Fatty Acid Composition Of The Mediterranean Diet Is Key

The improved lipid and inflammatory profiles from the program are due to a multitude of reasons, but the composition of dietary fat is certainly a prominent aspect for its effects.

This is based on a high concentration of unsaturated fats, coupled with a paucity of saturated and trans fats.

This supports guidelines from world health organizations, strongly recommending that individuals replace saturated and trans-fatty acids with mono- and polyunsaturated fats for both primary and secondary prevention.

Importantly, the Mediterranean diet is one of the only diets where individuals are able to keep their saturated fat intake <10%.

The Mediterranean diet can improve gut function due to its higher intake and bioavailability of dietary fiber - insoluble fiber in particular. It also has more than double the intake of dietary fiber compared to the typical Western diet (30 grams vs 14 grams per day).

At least in animal experiments, production of these short-chain fatty acids from the gut can suppress the development of several inflammatory, autoimmune, and allergic diseases.

In addition, individuals following the Mediterranean diet have experienced a complete reshaping of their gut microbiota, with an increase in certain healthy bacterial species, which are known for their ability to improve carbohydrate metabolism, convert carbohydrates into short-chain fatty acids, and secrete anti-inflammatory proteins when needed [14].

Generally, the richer a diet is in various plant foods, the more it is associated with a better and more phylogenetic diverse microbiota in the gut [15].

The Potential Risks of The Mediterranean Diet

While this diet is extremely beneficial it does have its risks too, and unfortunately they aren't very well publicized.

Below we've listed the primary concern that those following the program should be aware of:

Beware of Heavy Metals in Fish While Following The Mediterranean Diet

Meta-analyses conclude that an increased fish intake is a legitimate method to prevent cardiovascular disease morbidity and mortality [16].

However, it is noted that consuming fish is only favorable if individuals can effectively balance its intake so they do not risk toxicity from the heavy metal content.

This is because fish concentrate heavy metals in their bodies, which are originally present in the ocean from water pollution, and their excess consumption can have alarming effects in causing neurodegenerative disorders.

Cadmium, lead, and mercury, all found in certain types of fish, are now in the top ten chemicals of major public health concern.

Inadvertently Overeating Is Possible While Following The Mediterranean Diet

As you're not required to monitor how many calories you eat each day, there's still a very real possibility that you could end up overeating; just because you're on the mediterranean diet doesn't mean you'll automatically become healthier - you will still need to ensure you're not binge eating on the approved foods.

The Mediterranean diet is an awesome diet for totally overhauling your health, however if you're hunting for a weight loss diet, this may not be the most effective one to pick as it doesn't really reduce your daily caloric intake, and there's still a risk you could overeat while following it.

The big positive is that it really does adopt the principles of evidence-based healthy eating patterns, characterized by higher intakes of fruits, vegetables, and wholegrains, along with lower intakes of saturated fat, refined grains, and added sugars.

There is clear evidence for its ability to improve gut function, immunity, inflammation, and lipid profiles, and is most known for preventing cardiovascular diseases.

Out of all popularized diets today, the Mediterranean diet may well be the most well-balanced and should continue to be promoted for good health. The only potential issue we can see is the chance for heavy metal poisoning if fish consumption is too frequent, however an appropriate moderation of its intake can easily avoid this risk.